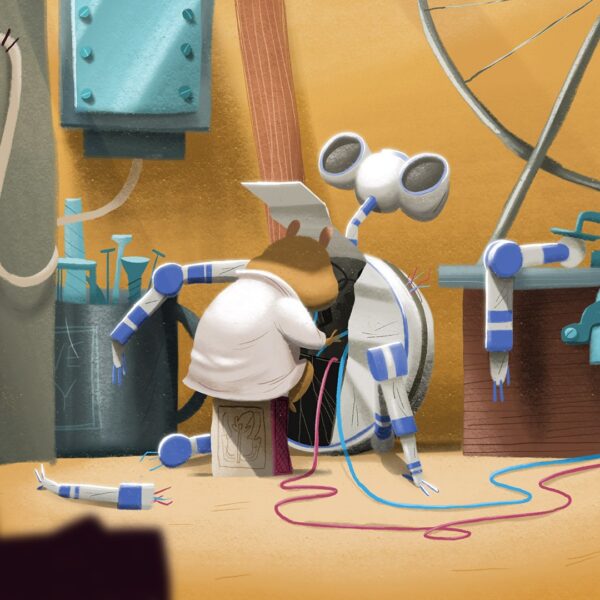 Most fulldome shows are about the universe. Our story is about how hard it is to get there.

Elon is a hamster scientist who lives on a dump yard. He tries to fit in the local rats’ community but nobody takes him seriously. The rats aren’t interested in his scientific experiments which often fail in practice.

One day Elon hears a crash. On his garden he finds a crater and a damaged robot inside. How did he get here? Elon fixes the robot and finds out that he fell from a space ship which is going to prepare Mars for colonization. But the ship leaves in three days.

And that’s how Elon’s great adventure starts. Will he manage to get the robot back to his ship before it leaves with all the robot’s friends? 3-2-1 Liftoff! Is an adventurous animated film about courage and wits you need to have to get in space and back.

get your screener
FDDB

Why will your audience love 3-2-1 Liftoff?

You just have to root for Elon the Hamster. His undying belief in the right outcome is infectious. Eight of Twelve, the robot, complements him with her technical prowess. And the rats are hilarious!

A film by filmmakers

Our team is made up of filmmakers who have made award-winning feature films and internationally successful animated series for children. Our main mission is to bring the world of full dome planetariums and the craft of filmmaking together.

We’ve teamed up with the experts at Planetum – the planetarium of Prague. With them, we fine-tuned the story to entertain children and parents while not offending even the most avid scientists.

We are Krutart, an animation studio and film production company from Prague. And also big enthusiasts about stories for kids! We come from the world of TVs and cinemas where we make animated series that travel around the globe. We’ve been mastering the art of storytelling ever since and now we are on a mission to bring our craft to the fulldome industry. We spent 3 years developing 3-2-1 Liftoff! as our debut fulldome feature and the first audience and first buyers love it. At the world premiere in Prague, both children and parents were glued to the screen and their happy faces after were our biggest payoff. We are excited with the possibilities fulldome format offers and we plan to push them even further with our next movie.

Give us a call